I promised a reveal, and a reveal I have…finally! I dug up some previously unseen before photos that will give you a much better perspective on the changes we made. 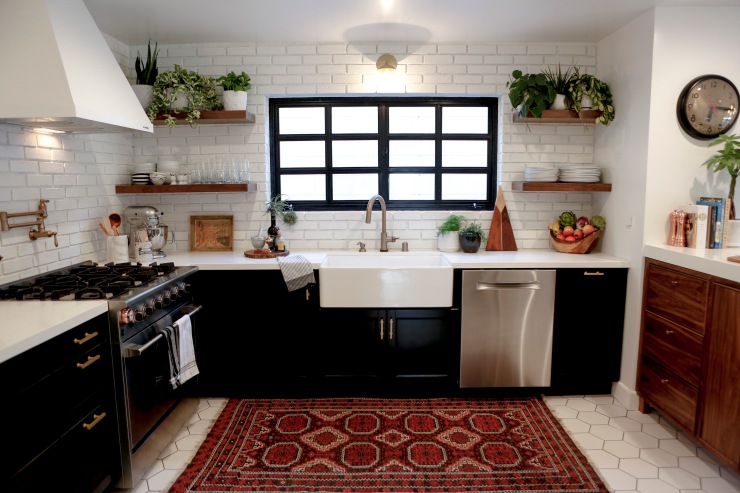 Where to begin? The first day we moved in, even though the kitchen was still very much in process, I was in disbelief and overwhelmed with gratefulness. It was hard to wrap my head around the fact that I would get to wake up to this kitchen. Though the floor tiles I landed on were more understated than my original inspiration, I think they work, and also compliment the mix of cabinets without overpowering them. I loved the continuity from the den to the kitchen of the white brick backsplash , and I felt like it gave the kitchen a sense of history.

I think two of the decisions that were the easiest to make, also had the biggest impact. Removing the tray ceiling to give the room a little more height and knocking out the small, awkward wall between the kitchen and eat-in area opened up the space in a big way. Deciding how to orient the rest of the kitchen was not so cut and dried.

I envisioned a few different stations in the kitchen. I was hoping for a bar-height counter where the kids could sit and talk to me as I umm…heated up Trader Joe’s chicken nuggets.  I thought a breakfast nook would be the most efficient use of the eating space, since it wasn’t large and a sliding glass door took up most of the back wall. I also wanted a place for our computer. We didn’t have plans for an office anywhere else in the house, and I knew, especially with homeschooling, we would be spending most of our time in the kitchen. My long-suffering husband and I spent an…ahem…”spirited” night working on the kitchen plan. There were a few points where I thought I might have to send my dreams of a bar off to Never-Never Land. But we kept playing with the plan, measuring, and walking the space, and we finally landed on this configuration. It was a beautiful moment. My bar would be small, but it would be mighty, and would also be the perfect place to set a golden loaf of prop bread.

I really love our little breakfast nook. It’s just the right size for the four of us to have intimate family dinners over dinner-y type food. Everyone has perfect manners while peaceful classical music drifts through the background. The kids use their utensils and always gobble up all the green things I put on their plates, then beg me for seconds followed by, “as long as you don’t make me partake in dessert, Mother Dearest!” There is no gagging, crying and negotiating, and everyone cleans up after themselves when dinner is over. Apparently, these are the kinds of things that happen when you just get a breakfast nook. If only I had known all along.

I’m a big fan of this light fixture from West Elm. I wanted a fun, modern pop of light over the table. I’m still a little disappointed with the black electrical cord that hangs down from the top and am concocting a way to remedy it.

This little bell holds a special place in my heart. It was my companion for many hours of imaginary play as a child at my grandma’s house. It seemed grown up and magical all at once. A few years ago when we were home visiting, my “Gaga” nonchalantly bequeathed it to my youngest child.  After almost hyperventilating,  I promptly told him I would “keep it safe” for him.  He didn’t love the idea, but I’m bigger than he is, so obviously, I won. The copper cup was a birthday gift from a dear friend.

The big blank space above the breakfast nook created some serious internal conflict in me. I have been looking for that perfect piece of art that will tie the room together. I assumed it would appear to me right before I had the kitchen photographed. Last year, when I was down to the wire finishing  up my husband’s office, I found 3 or 4 pieces of art at vintage/second hand stores in one day.  Apparently, those stores never recovered from my haul. I went back and they had nothing. I searched Craigslist. I looked at all my favorite sources online. But I had waited too late. And now whatever I ordered wouldn’t get here in time. I contacted super-talented artist friends to see if they had anything that would work for the space. I went on an “art walk” and showed official seeming people pictures of my blank wall. I begged artsy strangers for help. I made a lot of friends but came home art-less. I found pieces I loved for other spots in the house, and did land on a few pieces that could work for the nook. I came very close to buying something to keep from having a space with nothing. But then I realized that that was dumb. Was I really going to spend money on art that wasn’t the one, just so it could be photographed for my own blog? That would be like marrying a guy who was nice enough, just so you could have someone to take to your high school reunion.  (I realize that’s a little hyperbolic, but you get the point.) When I finally decided that I would wait, I felt so relieved. So here is my blank wall, that will stay blank until I find the one. And then, I’ll take another picture of it, and it might be with my iPhone, and that will be okay too. 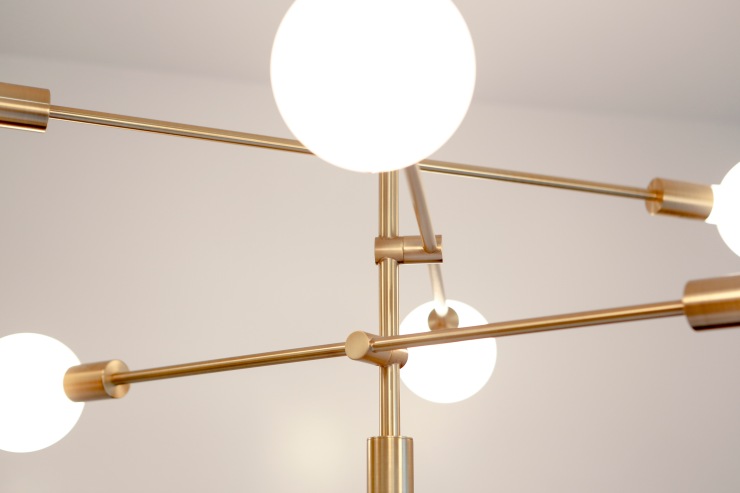 I chose white quartz counters. I wasn’t sure if I’d miss the Carrera marble that we put in a previous fixer-upper, but I wanted to try something new. I kept the counter at the desk area high, so that I could sit or stand at the computer. We also installed a wine fridge, because, well, wine.

I spend an inordinate amount of time sitting on that stool and staring at that computer, which is actually the computer I’m staring at right now, which means I might be caught in some kind of time vortex. 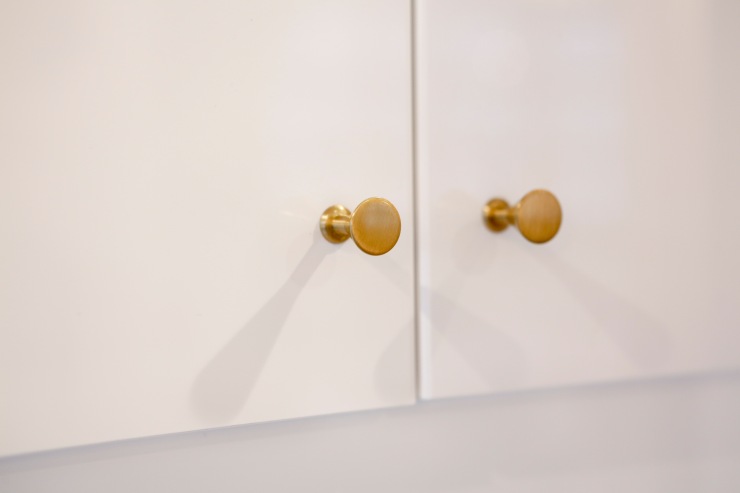 The previous door opening from the hall into the kitchen was very narrow and gave the room a closed-off feeling. I knew adding an arch would not only open up the room, but would increase the drama as well. (I’m always a fan of drama when it comes in the form of inanimate objects.)

I chose 10 1/2 inch brass pulls for the larger drawers, and 5 inch pulls for the smaller ones. Whenever it was possible, I picked drawers over cabinets, since they give you a much better view of all the things you’ve stuffed inside of them.

This fruit bowl was a souvenir from a family trip a few years ago to Costa Rica, but let’s be real, I don’t buy whole artichokes on the regular.

Thanks so much for letting me share my kitchen rehab with y’all!  I’m sure it will continue to evolve, and hopefully, that piece of art will make itself known sooner rather than later.

I’m looking forward to posting more of the projects I’ve got going on around here, and anyone else’s projects I can get my hands on, too!  Also, I’d love to introduce you to some of the beautiful shop owners and artists of all kinds I’ve met on my design adventures around LA.

Many thanks to the ridiculously talented Bethany Mollenkof for photographing my kitchen…and puppy, too!

View all posts by anomadathome